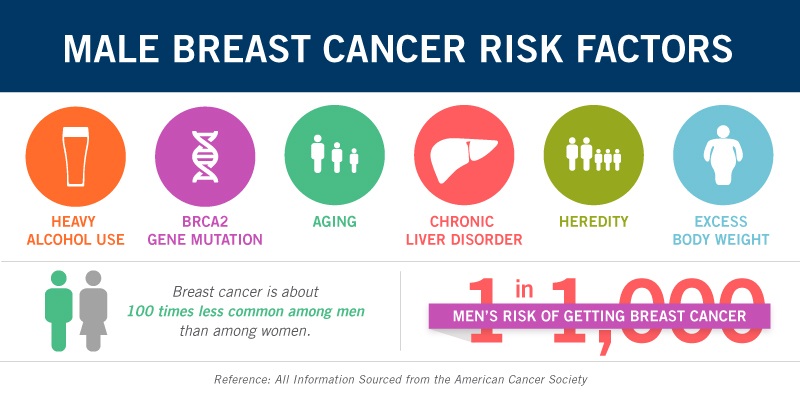 Breast cancer is not just a women’s disease, and as we head into Breast Cancer Awareness Month it’s good to take a moment to talk about this disease and how it affects men.

Although male breast cancer is rare, knowledge of this disease is perhaps hampered by a cultural belief that males should avoid talking about physical problems. This truism extends to men’s health in general, and in subjects such as male breast cancer there is a perceived stigma.

But this disease is no small matter. Male breast cancer can be lethal. Paying attention to the warning signs is critical.

Signs & symptoms could include the following:

Where breast cancer begins in men

Everyone is born with a small amount of breast tissue. During puberty, women begin developing more breast tissue, and men do not. However, men can develop breast cancer.

Types of breast cancer diagnosed in men include:

The causes of male breast cancer are unclear. Researchers know that male breast cancer occurs when some breast cells divide more rapidly than healthy cells do. The accumulating cells form a tumor that may spread (metastasize) to nearby tissue, to the lymph nodes, or to other parts of the body.

Like women, men can inherit abnormal (mutated) genes from their parents with a higher risk of breast cancer. The BRACA2 gene mutations especially increase risk. Such genes typically produce proteins that control cell growth and prevent abnormal growth. But mutated genes are not as effective as protecting from cancer.

RMI reminds men to pay attention to what their body is telling them. And don’t feel hesitant or embarrassed to speak to your primary care physician if you have concerns. Ignoring warning signs is not a sign of manliness, and it could result in deadly serious consequences going forward.